Mei is one of the main protagonists in Galactik Football and like many of her friends, she originates from Akillian. She is a player from the Snow Kids, playing as defender alongside Thran, and formerly a member of the Shadows where she played as striker Mei is also the love interest of D'Jok.

Mei is a very tall girl, with a slim figure and delicate, sharp features of her entire face construction. She has blue eyes and brown hair that is exceptionally long, and of which she wears in a high ponytail with a pink ribbon upholding it (yellow during her time at Paradisia and green when she played in the Shadows uniform).

The original character of Mei was manipulative, moody and insolent due to the strong influence of her mother in her childhood. However, during her time playing with the Snow Kids, Mei managed to develop strong relationships and began to be empathic for others, earning their respect and admiration of her teammates and Aarch. When her mother told her coquetease with D'Jok to create a rift between him and his friend, Micro-Ice, Mei felt very guilty about it, but under circumstances, did not refuse her mother.

In the second season, during their game against The Lightnings, she transferred the Breath to D'Jok so that he could gain more power and score.

Mei is a very skilled defender and has an exceptional kick strength (during entry tests she kicked a ball to the speed of 152 km/h, outdoing Sinedd and D'Jok). She has been able to deal with almost all the players who has ever faced.

She also began to use The Smog at least a couple of times in the Third Season.

From what is known of her early life, Mei has always been controlled by her mother. She was born in the time of the explosion that caused the Ice Age Akillian. From an early age has been raised by her mother to be a model or movie star, but with the help of Micro-Ice she finally came to understand how to set her priorities straight and refuse her mother, saying that she was a football player, not a super model.

When presented for testing the equipment, it was a defensive test, but after seeing it, said she did not want to do it, telling an offensive Aarch wanted proof. Unhappy with her whim, Clamp gave her a time limit to complete the task as punishment for her impudence, she quickly achieved. As it was chosen as one of seven players to team Aarch. She, along with all the Snow Kids, was later subjected to a test for the attacker. She managed to carry that too, but like she was doing a better job as a defense, the final decision to leave Aarch was on the defensive line.

After becoming a member of the Snow Kids, her mother constantly harassed for trying to become attacker as she believed that was where most heeded media. After several failed attempts to become attacker, she followed the advice of her mother and began to use her beauty to make D'Jok and Micro-Ice against each other, eventually causing it jealousy of Micro-Ice will did leave the team. after this, Aarch immediately gave the position of the attacker. However, when she played the game against The Shadows, she did not play well in that position. She constantly uses her skills as a forward defense, something that D'Jok noticed immediately. Micro-Ice returned from his brief tour with pirates just in time for the return match against The Shadows and Mei happily returned to her post defense. She played brilliantly in the match and admitted she had no regrets for not being up front. Throughout the first season she also became the model for different hair care products and clothing.

After arriving in Genesis Stadium, Mei began to form a friendship with Micro-Ice and soon began to see each other advice. Mei gave advice to Micro-Ice on how to get a girl and instead Micro-Ice taught her how to say "no" to her mother.

During the meeting with the V2 Technodroids she did a magnificent header and scored the fourth goal for Snow Kids. Later in the same match, she was gravely wounded by one of the robots, but she continued to play. At the end of the Galactik Football Cup, during which every other member of her team were unsuccessful in landing a goal against the Shadows, Mei was the one who scored the goal that won the Cup. After the final whistle she and D'Jok share their first kiss and signalling the start of their relationship.

She remains a loyal member of the team and shown in four years as girlfriend D'Jok. It often appears in the nightmare of D'Jok yelling "D'Jok, stop!" just before falling into the abyss.  When the Snow Kids had to play against their digital clones, Mei and Tia were the only players to be defeated "themselves" on the first try, while others had needed to try at least twice to complete the task.

She meets with Corso repeatedly to discuss Sonny D'Jok and so he knows how he is doing. When Tia's parents are imprisoned by Technoid, Mei presents Tia to Corso so he can help free her parents.

During her meeting with Xenons, she used the Spirit to make entries and get the ball. Cundo larger screen TV which is placed above the field began to fall, She saw that D'Jok stood there, paralyzed, and shouted to stay away from the place where the giant screen was about to fall. Then, during the penalty shootout, scored the second goal for the Snow Kids.

Mei is far from D'Jok and spends all her time in Genesis Stadium, however, it was later revealed that she is in Paradisia with Sinedd. During a friendly match against the Shadows, D'Jok argues with her for his defense and when it passes, makes a career using Akillian Spirit who transforms into The Smog because of her anger. Then she joins the Shadows and seems to be going with Sinedd. However, in the finals, D'Jok refused to move out of the way of a drop fence and Mei tries to convince to move. Sinedd saves Mei and D'Jok and Mei gets sad when Sinedd perishes left behind when Deep Stadium falls.

Sinedd survives and tries to make use Mei Smog to continue playing in the Shadows, but Mei refuses and leaves. They have an argument and break. Mei returns to the Snow Kids before round match against Wambas. In The Stars of Akillian are Eternal , Mei holds the Cup along with the rest of the Snow Kids. Then she mysteriously disappears in the midst of a training session with the young people of Club Galactik, Micro-Ice and Hush Sharky.

Mei with D'Jok in bedroom

Mei with D'Jok in the match 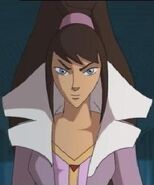 Mei with father and mother 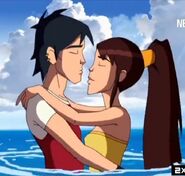 Retrieved from "https://galactikfootball.fandom.com/wiki/Mei?oldid=13160"
Community content is available under CC-BY-SA unless otherwise noted.