Norata is Rocket's father and Aarch's brother, he was originally a defence back for The Akillians however he lost his right leg after the explosion that caused the ice age. Norata is married to Kira.

Norata is a middle aged man who has a dull brown hair and a beard. He wears a grey turtleneck with stripes underneath a black vest. His left leg is amputated below the knee, in its place, Norata is wearing a prostethic leg.

Before the accident, Norata was full of joy and was happy with Kira and had a loving companionship with his brother Aarch. He loved Galactik Football and was one of the best defenders in the galaxy. After the accident however, he became bitter and regretful, he tried to keep his son away from anything to do with Galactik Fooball and disowned his brother. When he was reunited with Kira, he regained his cheerful nature and began to act friendly with his son and brother again. He is a very nostalgic individual and he has a love for flowers.

As a child, he and Aarch loved Galactik Football the most, and they even tried to build a spaceship to get them out of Akilian, as their father didn't want them to become footballers. He also ran away from home as a child but returned after some time.

Norata was said to be one of the greatest defenders in the galaxy, with fans giving him recognition even 15 years after his retirement from football. He retained the ability to use the Breath of Akilian and his great agility, despite him losing a leg.

15 years prior to the series, Norata was a defender for The Akillians with his brother Aarch, who was a striker. Norata was married to his lovely wife Kira and they were expecting a baby. During the qualifying match for the Galactik Football Cup, there was an explosion on Akillian that destroyed the Breath and plunged Akillian into an Ice Age. It is not shown but when the explosion occured, Norata was badly injured and his left leg had to amputated and replaced with a prosthethic one. At the same time, his brother left his side to continue his career as a footballer. Kira then delivered her baby who they named Rocket. Kira however wanted to go to Genesis Stadium and continue her dream of being a television star and the pair separated.

15 years later, Rocket is 15 years old and Norata has taught him to be a florist and at the same time forbad him to participate in anything related to Galactik Football. Norata was even less pleased when Aarch returned and he refused to accept him as his brother any longer. When Rocket appears on the television at Aarch's tryouts, Norata quickly arrives to stop him and takes him home. Unknown to Norata, Rocket had built his own skills by practicing in his own little cave and sneaks into Aarch Acadamy and is caught practicing in the holotrainer. Norata is once again approached by Aarch who eventually persuades Norata to let Rocket play for the qualifying match against the Red Tigers, if Aarch's team lost, Rocket would return to Akillian and Aarch was to never see them again, if they won, Rocket could play for the team.

When the team won, Norata began to distance himself from Rocket (aparently feeling betrayed), when Rocket is injured in an Akillian match, Norata came to visit him and asked Tia to watch over him. When the team went to Genesis stadium, Rocket called Norata after dicovering that his mother was alive (having lived his life thinking she was dead). Norata then left Akillian and arrived on Genesis where he met up with Kira after 15 years, the two spent time talking to each other and by the end of the series it was revealed that the two were going to get back together for the sake of Rocket. At the end of the first season and for the early episodes of the second season, Norata returned to Akillian with Kira where they worked together as florists. In The Homecoming, they joined Aarch and the Snow Kids on their journey back to Genesis after it was revealed that Rocket was missing and living somewhere on Genesis Stadium, they finally met with him when he visited the Snow Kids hotel however he didn't want to talk to them and it wasn't until Rocket came to his senses and rejoined the team that they were able to properly reunite. 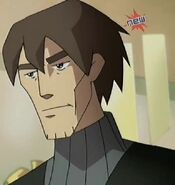 Retrieved from "https://galactikfootball.fandom.com/wiki/Norata?oldid=13026"
Community content is available under CC-BY-SA unless otherwise noted.