The Xenons are lizard like creatures that reside in their home planet Xenon. They are an immensely talented and dangerous team who are known for their immense use of intimidation tactics. Despite their intimidating appearance, are one of the fairest teams in the GFC. That being said, they are incredibly boastful and will not hesitate to make fun of their opponents.

Their Flux is The Heat of Xenon that greatly increases a player's agility and strength as well as paralyze opposing players.

Their star player is Luur whom, the team's tactics seem to center around passing to.

Before a match, the Xenons will usually perform a greeting dance (visibly similar to that of the haka) in order to intimidate their opponents.

It is described that a tragedy struck their planet prior to the show's beginning and that this tragedy is the reason why the Xenons did not participate in the Galactik Football Cup before the second season.

The Xenons play their first final on Genesis Stadium. The Xenons overpower the Cyclops by winning 3-0. In the semi-finals The Xenons were to play The Pirates, but The Pirates were disqualified because it was said that The Pirates made the explosion and temporary destroyed the Smog. In the semi-finals The Xenons beat the Shadows 5-3 and passed to the finals.In the finals Luur chased away his teammates and played the Snow Kids alone. He was winning 2-0 but the Snow Kids used their breath together and scored two goals. Luur called his teammates but didn't manage to score more goals. During the match, Bleylock's ship fell on Genesis and the pitch broke. D'Jok was gonna fall but Luur used his flux and saved him. As the pitch was broken, the match had to be decided by penalties. Luur shot the last penalty for The Xenons but Ahito saved it while Rocket scored for Snow Kids and Snow Kids won their second cup.

They later play in the Paradisian Tournament with Akkamukk on their team. They overpower the Technodroids V4s 6-1, but lost 1-0 to the Snow Kids. In the next Galactik Football Cup, they defeat The Rykers and advance to the Semi-Finals, but lost 4-1 when playing with the Snow Kids. 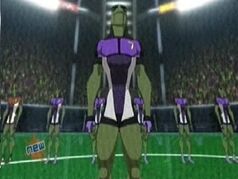 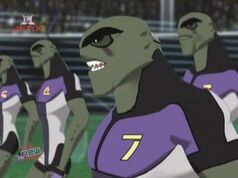 Add a photo to this gallery
Retrieved from "https://galactikfootball.fandom.com/wiki/The_Xenons?oldid=13144"
Community content is available under CC-BY-SA unless otherwise noted.